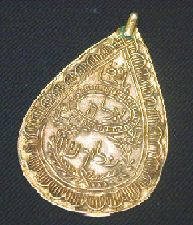 The soul has a star on heaven.

Menorah represents the wisdom of Taora, as holy sages of the Jews say. It is said that he who wants to be wise, should pray in front of it facing the south.

Ana B'Koach is a prayer written in the first century by a great rabbi Kabalist.

The prayer was written according to the seventy names of God, a term related to Abraham. Ana B'Koach consists of seven lines, with six words in each line. The first letter of each word creates God's name of 42 letters.

Siviti and all amulets, have a very specific writing preparation.

The process of making Jewish amulets does not differ in principle from Arabian magic. After the scribe reaches a special mental state, performs what is defined for the manufacture of amulets.

There are also shrines and strong names that the origin has been lost over time.

They recorded and broadcast by various occultists for hundreds of years and continues even today to demonstrate the efficiency and strength.